It’s funny, I don’t normally think of Fort Myers as the spring training home of the Twins. The Red Sox take ownership of the town. I’ll never make that mistake again. Hammond Stadium at the Century Link Sports Complex holds its own against JetBlue Park.

The stadium was built in 1991 and was renovated recently in 2014. It had a decidedly different look than Jetblue Park. It had a plantation, almost Churchill Downs feel. There was no mistaking we were in the South. I also felt like I was walking into a cathedral of baseball. You can even see what looks like a cross as you entered. It is an eminently photogenic stadium–that’s a waterfall fountain in the front–and I am starting to get a little jealous. Even spring training homes are prettier than my team’s real stadium. Okay, a baboon’s taint is prettier than my team’s stadium, but I have digressed.

The parking lot has rows named after past and present notable Twins.

Another key significance between Jetblue Park and Hammond is that Hammond had bern seating. My seats today were economy bern seating as the Twins were playing the split squad Orioles, and I had no vested interest in either team. For those unfamiliar with bern seating, those are grassy areas in the park where you can pop a squat and watch the game. Hammond also encourages the fans to walk around the stadium itself. The park is set up such that you can walk the entire perimeter, which is different than JetBlue. I did not mention that JetBlue did not want fans without tickets atop the “Green Monster.” 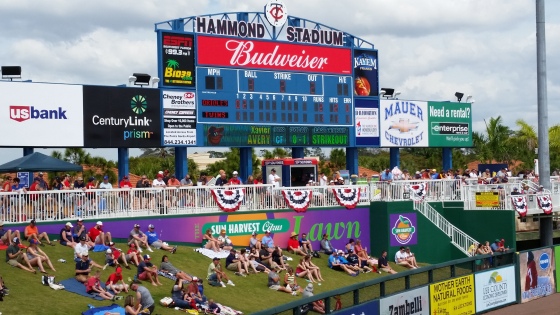 The only place to get the line-up was on this whiteboard in the walkway:

The Orioles did not have a good afternoon.

While there, I enjoyed what I was told is a rare delicacy, only available in a few rare corners of the world:

Game notes: The Orioles made count ’em, five errors in this game in a 13-2 laugher. I expected the mercy rule to take effect as their B-squad made their best Bad News Bears impersonation. Quite honestly, it was six errors but the official scorer took mercy on them. Third basemen Steve Tolleson was responsible for three of them. It was ugly. The Twins collected 16 hits, but it’s difficult to gauge how well they did since the Orioles only brought their AAA squad with them. Their pitching was as bad as their defense, allowing three home runs. OF Hyun soon Kim, signed out of Korea, is 0 for the spring, but it is still early. On the Twins side, Ervin Santana pitched well, and Buxton is very, very, very fast.

Berm seating was relaxing. With the score ridiculous, I laid down the last couple of innings and caught some sun.

I then pointed my compass north and headed towards Sarasota, the last leg of my tour, Ed Smith Stadium. These are some beautiful quaint stadiums. None of these stadiums are behemoths. They are intimate showcases. I like this stadium because it is ensconced in a neighborhood. It is not gated and separated from the environment like the others. You walk, and all of a sudden, look at what we have here. It also gives good face. 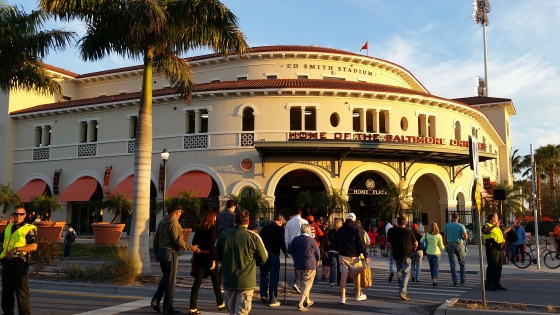 This one has a Spanish tile roof and stucco walls. The rotunda:

Game time is 7pm, but I arrived in plenty of time to do my favorite thing, watch my starting pitcher warm up for the night. The weather again could not be more perfect. Drew Smyly is our man tonight. 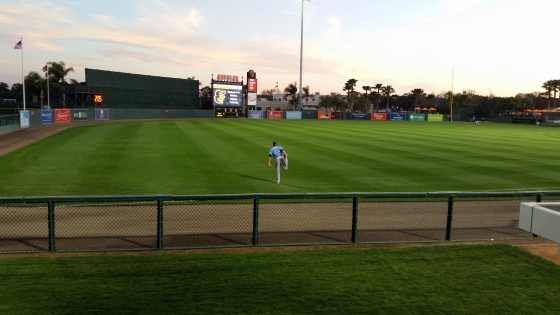 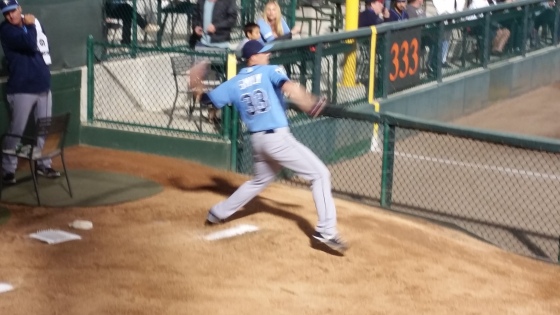 The bullpen area was cool, and they had seats, so there I decided to stay the whole game. LHP Enny Romero was milling about the bullpen. He smiled at me and asked me, “Hablas espanol?” I said, “Si, seguro. Es de Santo Domingo?” He nodded and said, “Si.” I said, “Mi mama es de alla.” He nodded and smiled and went back to work. Not long after, a deep line drive foul ball came into my area. I lost the ball in the lights and it bounced next to me. I didn’t see where it went, but it bounced into the bullpen. Romero gave it back to me. The usher came to make sure I was okay. Other than embarrassed I didn’t catch the ball, yes, I was okay. This stuff does not happen to me normally. The ball is very cool. It is stamped with the FL Spring Training insignia.

Again, the Orioles did not look good in a 10-6 loss. They are 0 for Spring Training (0-5-1). It is very early, so there is no cause for alarm, but the fans were definitely restless. RHP Kevin Gausman looked good, so that is one bright spot, striking out 3 while pitching two scoreless frames. Most of the Rays’ damage came off of Todd Redmond and some minor leaguer. In total, they allowed the Rays 17 hits. Their spring training ERA is 8.31, solid 30 of 30. Again, early in spring training, this is a lot of white noise, but patterns will start to develop in the coming weeks that will be cause for concern if things do not start to straighten out.

Smyly was sharp also, throwing two perfect innings, and striking out Davis, Trumbo, and Wieters. The Rays’ defense again, left me less than impressed. Three errors. It is early, but one thing I was concerned about with some of their off-season moves is that they sacrificed defense for offense. Momma is not happy with that. Poor defense will ultimately hurt their pitching, their core strength, and I hate sloppy baseball. Most of the Orioles’ six runs were gifts thanks to woeful defense. They have to work on that. But back to pictures…

It was Fireworks Night, so the weekend was topped with fireworks. I don’t think I could have picked a more perfect ending.

I took one last picture on the way out. It shone bright like a diamond.

Can you tell I did not want this weekend to end?

This was by far the most diverse fan base of the three stadiums we visited. White, blacks, Latinos. I notice these things because a lot of times I notice I am different. I can’t help noticing. I am alone. I am conspicuous, the token. (I played a game at mini-Fenway: spot the black person. There was one darker than me.) It has been that way most of my life because I overachieved a little, so I know how to navigate, but my preference was last night. A beautiful pastiche, a swirl of color. It felt so good to see so many different beautiful faces. Very cool, Orioles.

I also really enjoy talking to my fellow fans. I meet so many great fans. I spoke to this wonderful Orioles fan from Maryland most of the game yesterday. Really nice man, knew his stuff. In Hammond Stadium, same thing. Spoke to this great woman from Minnesota, enjoying the game. This is the great part of Spring Training, shooting the breeze with people on a lazy day in a meaningless game. Baseball means so much to them that they traveled all the way here just to experience a meaningless game, and I was honored to share it with them. I wish you could all had been there with me. I had the best time.

I am here to tell the tale of Chris Effin’ Davis. Prior to this season, I knew who he was. He’s a first baseman for the Orioles who spent some time with the Rangers. The season is but a newborn babe but now I KNOW who he is. He is the killer of hope, the crusher of baseballs, and the stuff of my nightmares. I woke up in a cold sweat last night, muttering the words “Chris…Effin’…Davis.”

In 11 AB, just 3 games, he did this to my beloved Rays: .636/.692/1.727. That’s an OPS of 2.419. 2.419!!!! I know it’s a small sample size and this kind of production is not sustainable (or IS IT?), but you have to understand how traumatic it is to witness a whipping, nay, a thrashing like this. Let me continue with the evidence. He had a total of 11 RBIs. To reiterate, he only had 11 AB. Three homers, three doubles, and seven singles was the final toll. Every time he came up to the plate. Boom. It didn’t matter what the Rays threw at him. Fastball. Boom. Curve. Boom. Slider. Boom. Every single time with men on base. BOOM. I’m going to curl up in a fetal position again and beg for my mommy.

Update: 10:30 pm. Since I wrote this earlier today, Chris Effin’ Davis is continuing his trail of destruction and has hit his 4th home run of the season in as many days–becoming just the 4th player in MLB history to hit a home run every day in the first four days of the season and joining the ranks of Willie Mays, Mark Maguire, and Nelson Cruz. Fortunately for my sanity, Davis has left the Tampa Bay area, but I’m having flashbacks.